The Second Revolution by Axel Weipert

The Historical Materialism Book Series plans to translate a book by German historian Axel Weipert containing ground-breaking research on the workers’ council movement in Berlin during the revolutionary tumult of 1919–20. But we need your help! 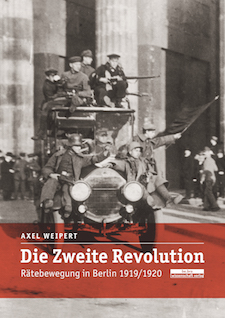 For a long time, Berlin’s council movement was considered no more than a brief episode that occurred just after the November Revolution of 1918. The common understanding is that of a transitional phenomenon paving the way for the parliamentary Weimar Republic. Moreover, many conservative historians have denounced the councils as being entirely undemocratic.

In his ground-breaking work The Second Revolution: The Council Movement of Berlin 1919–20, Axel Weipert significantly revises this picture. Based on a wealth of sources, Weipert shows that even in 1919–20, the council movement involved about one million active participants in Berlin alone – a fact overlooked by historians for nearly a century – and that the egalitarian aspirations of the councils and their mass following clearly pointed beyond the democratic limits of the Weimar order. The Second Revolution argues that the council movement was much broader-based than previous research has assumed, and that it was striving towards a socialism based on grassroots democracy – i.e. towards a social order determined to consistently abolish the prerogatives of the old elites in the military, in administration, and above all in the economy.

Until the publication of Weipert’s book in the original German language, it was mainly workers’ and soldiers’ councils that were examined in the relevant literature. Even if these represented the core of the council movement, The Second Revolution shows how broad the reception of the idea of council democracy really was: there were special councils for apprentices, intellectuals, artists, the unemployed, and students and pupils, whose activities are comprehensively discussed for the first time here. In another first, Weipert examines the role of women in the movement.

For a long time, research on the German revolution and the council movement was informed by Cold War dichotomies. GDR historians viewed the revolution as a missed opportunity, which was then made up for in East Germany after 1945. In their interpretation, the councils were merely a vehicle for party politics, and only the weakness of the Communist Party prevented a socialist transformation. West German authors, on the other hand, interpreted the councils at best as a potential, but not permanent, supplement to a democratic reconstruction from above. Both readings reduced the second phase of the revolution to a mere aftermath.

In contrast, by bringing to light the rank-and-file movement and independent role of the councils outside of parties and unions, The Second Revolution is paradigmatic of the new possibilities opened up in the historiography of the German Revolution after the end of the Cold War. The volume argues that Weimar Germany was in a revolutionary situation in 1919–20. It will be of particular interest to historians of the Weimar Republic and scholars of social movements, but it is also accessible to a broader left audience.

A broad range of sources, many of them previously unpublished, is analysed. In addition to 26 periodicals and around 50 autobiographical texts, The Second Revolution contains minutes of meetings, pamphlets, leaflets and posters and numerous official files from various archives.

Because of the great historical significance of the materials assessed in this work, the Goethe Institute of Germany has agreed to fund a part of the translation of The Second Revolution into English. Nevertheless, we are still 7,650 EUR short and currently raising funds to make this project possible. Please consider chipping in!

Our subject, its historical context and its significance

The present state of research

The March 1919 General Strike in Berlin

The course of events – a brief outline

Strikes in other parts of Germany

Objectives and measures taken by the leadership

Coordination with other regions

Pressure from below – the base of the movement

Scope and capacity for mobilisation

The citizen’s council in the general strike

The role of the media

The strike and street-fighting

The response of the governments

The Demonstration of 13 January 1920 outside the Reichstag

The opposition is taking shape

The course of events at the demonstration

The role of security police and military

The Council Movement and the Kapp-Lüttwitz Putsch

The right opens fire: the putsch

Counterattack from the left: general strike in Germany and Belin

Workers’ organisations for and against the councils

A second springtime for the councils?

Student Councils in the Schools

The structure of the school councils

The school strike in the summer of 1919

Relationship to the ‘actual’ council movement

Organisational development of the unemployed councils

Relationship to other sections of the labour movement

The ‘Political Council of Brain Workers’

Women and the Council Movement

Contemporary reflections on the integration of women into the councils

The Social-Democratic Party of Germany

The Communist Party of Germany (KPD)

Relationship to the state

Information on the web

“A truly pioneering accomplishment … Weipert has not only produced an important work on a chapter of left history, but also offers suggestions for today’s political practice.”
(Peter Novak, Neues Deutschland)

“Weipert succeeds in bringing new aspects to light ... It is precisely at the margins of the council system, neglected by all previous accounts, that Weipert shows its flexibility on the one hand, but also the limits that linking the right to vote to the workplace entailed. His considerations could provide inspiration for modern-day models of grassroots democracy and self-government.”
(Ralf Hofrogge, Analyse & Kritik)

“Axel Weipert’s work fills an important research gap ... The book argues clearly and convincingly on the basis of very solid sources that the council movement was more than ‘just’ a movement of workers and soldiers ... Future labour movement and revolution studies will benefit from the results. A translation into English is very desirable, not least because in this way the findings of the present study can be adopted in English-language research.”
(Prof. Dr. Klaus Winhauer, Faculty of History, Philosophy and Theology, Center for InterAmerican Studies (CIAS), Bielefeld University)

“This study is an important for experts on the subject, but it is more than that. A translation will be necessary to allow a new generation of students, not least at post-graduate level, to become aware of the trends of recent research and the impact of the suppression of the councils upon the development of the Weimar Republic … Given the urgent need for this important work to be available in English, I wholeheartedly, indeed emphatically, recommend this study for translation.”
(Dr Norman LaPorte, Reader in Modern European History, Advisory Board (Beirat), Co-founding editor of Twentieth Century Communism: A Journal of International History)

“Supported by an impressive basis of sources, the author delivers an abundance of new facts ... Weipert’s work is an important part of the research activities of a younger generation concerning the revolutionary period ... I strongly recommend a translation into English of this innovative and, moreover, very readable work.“
(Prof. Dr. Dieter Brandt, Dimitris Tsatsos Institute for European Constitutional Studies, Open University Hagen)

“The book will meet with a considerable echo in its English-language version ...  I strongly recommend a translation.”
(Prof. Dr. Arnd Bauerkämper, Department of History and Cultural Studies, Friedrich Meinecke Institute)

“Weipert has made a weighty contribution to the study of the German Revolution in two senses, which did not end with the November Revolution, but led to a second revolution, which then also failed. However, its failure in no way diminishes its historical significance.”
(Prof. Dr Wolfgang Wippermann, Friedrich Meinecke Institute, Free University of Berlin)

“Any contemporary work seeking to provide an integrated picture of this period will certainly now have to rely centrally on Weipert’s analysis. The book will be required reading for historians of the Weimar Republic and the Revolution and scholars of social movements as well as a broader left-wing audience … In short, Axel Weipert’s The Second Revolution is a distinguished work of scholarship with lasting significance that richly deserves your support for translation.”
(Geoff Eley, Professor of History and German Studies, University of Michigan)

“This book is extremely important … Not only is it detailed and well-written reconstruction of the Berlin works councils and the council movement during and after the November Revolution, his narrative expands the boundaries of the topic. Weipert’s research includes important treatments of aspects of the council movement outside the traditional (mainly male) working class, such as proto-feminist women’s councils and unemployed councils, as well as instances of democratic youth organs forming among students and young workers … His work gives voice to the many other marginalised groups seeking to articulate their political convictions and social interests in the wake of World War I … The author successfully weaves together multiple levels of analysis and aspects of the revolution into an important work of original scholarship that makes an important contribution to understanding the depth an breadth of council-democratic impulses in Germany’s post-war revolutionary period… An impressive of social history. [Among] the resurgence of publications in German social history since the late-2000s, Weipert’s is one of the most remarkable”.
(Dr. William A. Pelz, Director of the Institute of Working Class History, Chicago)