The classic work influenced the Italian mobilizations of the late-sixties and seventies has never before been translated into English in full. It is contracted to be published by Verso Books. But we need your help! 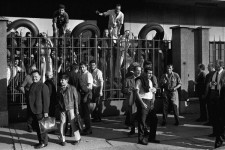 The wave of mobilizations that swept Italy in the late-sixties and seventies have been made famous in the Anglo world through Rachel Kushner’s The Flamethrowers. However, the 1966 work that influenced much of this movement, Mario Tronti’s magnum opus Operai e capitale (Workers and Capital), has never before been fully translated into English.

Mario Tronti (1931- ) was one of the progenitors of Italian operaismo(workerism), a hugely influential intellectual project that identified workers and worker revolts as the real driving force behind capitalist developments, rather than the reactive tendencies of capital. Workers and Capital is operaismo’s theoretical articulation. Born into a working-class Communist family in Rome, Tronti studied philosophy and co-founded two of the main operaist journals of the sixties, Quaderni Rossi and Classe Operaia. Their worker inquiries transformed Italian sociology, and eventually, the autonomist movement would grow out of operaismo as well.

We are now raising funds for the translation of Workers and Capital, which will cost $16,500. All donations over $100 will receive a free copy of the book. Donations over $250 will get you two copies of the book, plus a $50 voucher for the Verso website (where you can purchase other books); $500 will get you four copies of the book, plus $100 on the website. If you’re able to donate $500 or more we’ll also thank you on a donors page for the project, and donations of $1,000 or more will also be acknowledged in the book.