Domenico Losurdo is one of the most prominent Marxists of his generation, and among his most important still to appear in English is Democracy or Bonapartism: Two Centuries of War on Democracy, contracted with Verso Books. But we need your help! 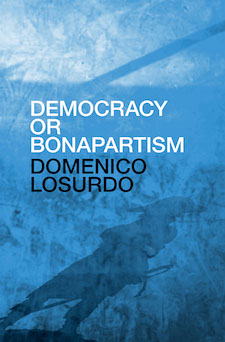 Domenico Losurdo (1941-2018) was one of the most prominent Italian Marxists of his generation. He is best-known in the English-speaking world for his searing critiques of liberal ideology and its marriage with the politics of slavery, genocide and racism, skewered in his Liberalism: A Counter-History. Pushing back against the intellectual complacency of the Western liberal tradition, Losurdo’s works tore apart the ideological assumptions undergirding anticommunism, totalitarian theory and revisionist historians like François Furet and Ernst Nolte.

A scholar at the University of Urbino, in his lifetime Losurdo attracted global interest for his studies of philosophers as varied as GWF Hegel, Friedrich Nietzsche and Antonio Gramsci, translated into multiple languages. However, at the time of his death in 2018, when the septuagenarian Losurdo was still a prolific writer, several of his works were still to appear in English. Among the most important, due to be published in 2023, is Verso Books’s edition of Democracy or Bonapartism: Two Centuries of War on Democracy.

In this study, Losurdo examines the fraught history of the fight for universal suffrage. He shows how, long into the twentieth century, democratic polities limited voting rights through property qualifications, racial and sexual discrimination, and other barriers to enfranchisement. These forms of discrimination were not just an aberration against liberal norms, but were, Losurdo argues, most intractable in the very countries where the liberal tradition had first taken root. Democratic values were not their cultural underpinning, but something which their elites had continually resisted.

Even after the formal concession of universal suffrage, this war on democracy has continued in recent decades with the effort to hollow out democratic participation — reduced to an episodic selection of leaders. This “soft Bonapartism” is, indeed, an increasingly prevalent form of rule in the modern parliamentary democracies, from Losurdo’s own country to the United States. Faced with the hardening of neoliberal authoritarianism faced with the crises of our own era, Losurdo’s account effectively exposes Western liberal polities’ antidemocratic traditions, the elite “war on democracy” which the workers’ movement has always had to resist.

The English-language translation of the book is well-advanced — and the book will be published in 2023. But with Losurdo’s untimely death, we need to raise funds to pay for the translation.