This major, original work from the celebrated commentator on Hegel, is contracted to be published by Verso Books. But we need your help! 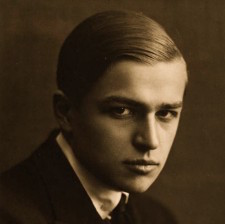 Alexandre Kojève (1902-68) is best known for his seminal lectures on Hegel, which were attended by Georges Bataille, Jacques Lacan, Maurice Merleau-Ponty, Raymond Queneau and Andre Breton. His original interpretations, which read Hegel through the lens of Heidegger’s temporalized ontology and Marx’s dialectical materialism, influenced an entire generation of continental philosophers, including Foucault, Derrida and Leo Strauss. He effectively introduced Hegel to 20th century French philosophy.

Kojève was also a philosopher in his own right, although many his works are only now appearing in English—in 2014, St. Augustine Press is publishing The Concept, Time and Discourse, and Verso is publishing The Notion of Authority. Outline of a Phenomenology of Rightwas only published in 2007. But these are hardly the extent of his work. Among the rest, an unfinished, nearly-thousand-page handwritten manuscript, dating to 1940-1, was discovered in an archive by a Bibliothèque nationale de France librarian and remains unpublished. The story goes that part of the manuscript was taken to the Soviet Embassy in 1940, where it would have been preserved. However most the papers in the Embassy were burned after the Nazi invasion of the Soviet Union in 1941, and it is highly unlikely that a philosophical work would have been spared.

The title of the manuscript is indeterminate (it is referred to in different places as “An Essay on the Introduction to Philosophy” and “An essay on the dialectical introduction to philosophy on the basis of Hegel’s ‘Phenomenology’, interpreted in light of Marxism-Leninism-Stalinism”). What is clear is that Kojève intended for this to be a major work, showing how genuine philosophy (ultimately found in Hegel) coincides with scientific socialism (ultimately developed in Marxism-Leninism-Stalinism). Many of its themes can be found in Kojève’s lectures on Hegel’s Phenomenology, but this manuscript expands on those ideas, and will elucidate how Kojève reformulated and refashioned them depending on the context. The lectures only provide one context; this work traverses many, and will be a great contribution to both Kojève scholarship and philosophy in general. (In any case, Anglo readers only have access to the truncated translation of the lectures edited by Allan Bloom.)

The manuscript will be transcribed and published in Russian by V-A-C Foundation. We seek your help to translate the finished product into English, and need to raise $34,200. All donations over $100 will receive a free copy of the book. Donations over $250 will also get you a copy of The Notion of Authority, plus a $50 voucher for the Verso website (where you can purchase other books); $500 will get you two copies of each book, plus $100 on the website. If you’re able to donate $500 or more we’ll also thank you on a donors page for the project, and donations of $1,000 or more will also be acknowledged in the book.